Steph Kent and Logan Smalley’s book, The Call Me Ishmael Phone Book, is a revival of the yellow-pages directory you remember, but instead of contact information, it is filled with messages collected from book lovers all over the United States about the books that have changed their lives.

One night in 2014, two readers named Logan Smalley and Stephanie Kent discussed their favorite literary opening lines. “It was the best of times, it was the worst of times,” one suggested. “All of this happened, more or less,” the other pointed out. And then, one phrase came immediately to mind: “Call Me Ishmael.” The pair then embarked on a six year project compiling voicemails from readers about their most beloved books. In their new book, these voicemails and other featured items have been compiled in an interactive guide for any bibliophile.

Stephanie Kent is a writer and multimedia producer. Her recent work includes the Webby Award–winning Masters of Scale podcast, The Wall Street Journal’s premiere mobile-first news app, and a series of book reviews for Boxing Insider. During her time on staff at TED, Steph built community programs and brand engagement strategies. She was awarded a 2017 Creative Community Fellowship with National Arts Strategies Foundation and holds a BA in playwriting and literature from Emerson College. Stephanie writes a weekly newsletter on creativity, and is a competitive boxer.

Logan is the founding director of TED’s youth and education initiative, TED-Ed—an award-winning website, content format, and program offering that serves millions of teachers and students every day. Prior to working for TED, Logan was selected as a TED Fellow for his roles as director, editor, and composer of the nonprofit, feature-length film, Darius Goes West. Logan began his career as a special education teacher in his hometown of Athens, GA, and he currently lives and works in New York City.

“His characterization, by the people who study Herman Melville, is as a fortuitous witness, and he is described as insatiably curious. It’s kind of neat that this site stays true to that in some ways in that, from a characterization standpoint, Ishmael is still just collecting stories, and sharing them. He just happens to use a voice mailbox instead of a harpoon or a book or however.”

A personal note from Steph and Logan.

Bibliophiles, thank you for spending an afternoon with us to think about books and the many (many!) reasons they matter.

After our conversation, we took a walk around the block in our beloved New York City and reflected on our luck at being able to connect you all. We’re especially glad for the opportunity to talk about why we believe so deeply in supporting independent bookstores, and how critically important it is for us all to do so right now. We’d like to leave you with a few of our favorite books about bookstores, and ask, if you’re able, that you consider picking one up from Book Passage.

The Storied Life of AJ Fikry by Gabrielle Zevin

The Bookshop by Penelope Fitzgerald 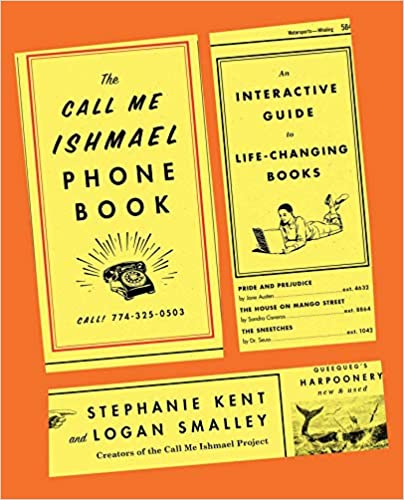 The Call Me Ishmael Phone Book: An Interactive Guide to Life-Changing Books