in conversation with Meena Harris

Pramila Jayapal’s Use the Power You Have offers a wealth of ideas and inspiration for a new generation of engaged citizens interested in fighting back and making change, whether in Washington or in their own communities.

Pramila is the Congresswoman who represents Washington’s 7th District, which encompasses most of Seattle and surrounding areas. The first Indian American woman in the House of Representatives, Pramila has spent nearly thirty years working internationally and domestically as an advocate for women’s, immigrant, civil, and human rights. She lives in Seattle, Washington.

Meena Harris was born into a family of strong women whose legacy continues to inspire her. Her grandmother, Shyamala Gopalan, was a cancer researcher and civil rights activist; her mother, Maya Harris, is a lawyer and policy expert; and her aunt, Kamala Harris, is a United States senator from California. Meena herself is a lawyer and entrepreneur. In 2017 she founded the Phenomenal Woman Action Campaign, a female-powered organization that brings awareness to social causes. She currently resides in San Francisco with her partner and two daughters.

Meena’s Kamala and Maya’s Big Idea, an empowering picture book about two sisters who work with their community to effect change, inspired by a true story from the childhood of her aunt, US Senator Kamala Harris, and mother, lawyer, and policy expert Maya Harris.

“We on the Left are very good at criticizing people, but we need to build the base to pull people to the Left.“

Get ready to join Pramila in conversation, Sunday August 30th. 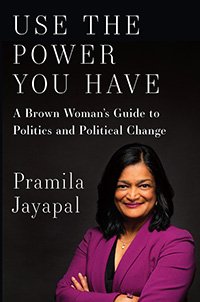 Use the Power You Have