in conversation with Ayelet Waldman

Michelle Bowdler’s debut blend of memoir and cultural investigation, Is Rape a Crime?, tells the story of her rape and recovery while interrogating why one of society’s most serious crimes goes largely uninvestigated.

Michelle is a recipient of a 2017 Barbara Deming Memorial Award for non-fiction and has been a Fellow at Ragdale and MacDowell Colony. She has been published in the New York Times and in the anthologies The Anatomy of Silence (Red Press) and We Rise to Resist: Voices from a New Era in Women’s Political Action (McFarland). Her essays: Eventually You Tell Your Kids and Babelogue were both nominated for Pushcart Prizes.

Michelle has worked in the public health field for years on issues of addiction, violence prevention, sexual health, HIV education and prevention. She has been involved, as well, for over a decade working on social justice issues related to rape and crimes of violence. Currently, she has the pleasure and honor of working as Executive Director of Health & Wellness at a major university in Boston where her work involves efforts to provide excellent sexual assault prevention and treatment for students in addition to mental health and health care.

Michelle is a graduate of Brandeis University, where she studied and fell in love with literature and writing, and of the Harvard School of Public Health, where she learned that so much of healthcare access and outcomes have a social and cultural component.

She is married to a wonderful woman and they have two awesome children.

Ayelet Waldman is the author of A Really Good Day: How Microdosing Made a Mega Difference in My Mood, My Marriage, and My Life, the novels Love and Treasure, Red Hook Road, Love and Other Impossible Pursuits, and Daughter’s Keeper, as well as of the essay collection Bad Mother: A Chronicle of Maternal Crimes, Minor Calamities, and Occasional Moments of Grace and the Mommy-Track Mystery series. She is the editor of Inside This Place, Not of It: Narratives from Women’s Prisons and of Kingdom of Olives and Ash: Writers Confront the Occupation.

She was a Federal public defender and an adjunct professor at the UC Berkeley law school where she developed and taught a course on the legal implications of the War on Drugs. She lives in Berkeley, California, with her husband, Michael Chabon, and their four children.

“I hope this story can help us move a little closer to that distant claiming of power – power that includes full legitimacy, respect, and equal treatment under the law, power that I believe is in our grasp.”

Get ready to join Michelle in conversation, Sunday, August 9th. 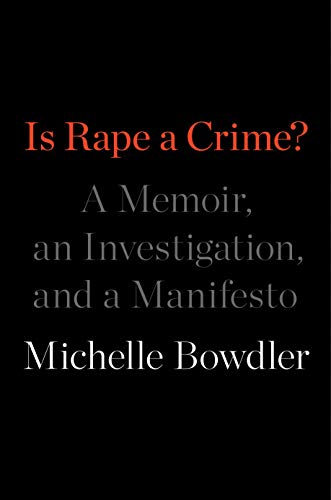 Is Rape a Crime?: A Memoir, an Investigation, and a Manifesto