in conversation with Peggy Orenstein

Michael Ian Black‘s A Better Man: A (Mostly Serious) Letter to My Son, is both poignant look at boyhood in the form of a heartfelt letter from the comedian to his teenage son before he leaves for college, and a radical plea for rethinking masculinity and teaching young men to give and receive love.

Michael is an actor, comedian, and writer who started his career with the sketch comedy show The State, on MTV, and has created and starred in many other television shows. Movie appearances include Wet Hot American Summer, The Baxter, and Sextuplets.

Michael is the author of several books for children, including the award-winning I’m Bored, I’m Sad, and I’m Worried, and the parody A Child’s First Book of Trump. His books for adults include the memoirs You’re Not Doing It Right and Navel Gazing, and the essay collection My Custom Van. Michael also co-authored with Meghan McCain America, You Sexy Bitch.

As a stand-up comedian, Michael regularly tours the country, and he has released several comedy albums. His podcasts include Mike & Tom Eat Snacks, with Tom Cavanagh; Topics, with Michael Showalter; How to Be Amazing; and Obscure. He lives in Connecticut with his wife and two children.

Peggy Orenstein is the author of the New York Times best-sellers Boys & Sex, Girls & Sex, Cinderella Ate My Daughter and Waiting for Daisy as well as Don’t Call Me Princess, Flux, and the classic SchoolGirls.

A contributing writer for The New York Times Magazine and AFAR, Peggy has also written for such publications as The Los Angeles Times, The Washington Post, New York, The Atlantic and The New Yorker, and has contributed commentaries to NPR’s All Things Considered . She has been featured on, among other programs, Good Morning America, CBS This Morning, The Today Show, Morning Joe, NPR’s Fresh Air and The PBS News Hour. Her TED Talk, “What Young Women Believe About Their Own Sexual Pleasure,” has been viewed over five million times.

“There’s things I know I’m good at, and those things interest me less and less. I learn a lot more from doing it wrong than I do from doing it right.“

Get ready to join Michael in conversation, Sunday September 27th. 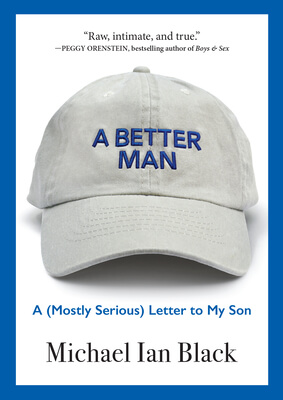