in conversation with Michael Krasny

Mary Ladd and Don Asmussen in conversation with Michael Krasny

Mary Ladd‘s The Wig Diaries is an irreverent cancer book, delivered with bold gallows humor to intimately address the gravity of cancer. Illustrated by San Francisco Chronicle cartoonist Don Asmussen, this uniquely fresh modern and black comedy covers and pokes fun at everything from diagnosis to treatment to medical bills.

Mary‘s writing has appeared in Playboy, Time Magazine, Health, the San Francisco Chronicle, and in five anthologies, including Lit Starts: Writing Humor from Abrams and the best-selling 642 Things series. You may have seen her onstage at the Community of Writers at Squaw Valley, Breast Cancer Action, Bay Area Young Survivors (BAYS) and Litquake. She is a Writers Grotto member who collaborated with Anthony Bourdain on his Bay Area episodes of No Reservations.

Don is the creator of Bad Reporter, a twice-weekly political comic strip in the San Francisco Chronicle that is syndicated by Universal Press Syndicate and the author of Dog vs. Cat: A Nation Divided and The San Francisco Comic Strip Book of Big-Ass Mocha.

Thank you for joining Don, Michael, Elaine and I to talk about cancer, humor, The Three Stooges, grief and wigs. You could have watched TV (I’m really digging Bay Area native Andy Samberg in Brooklyn Nine Nine), cleaned your toilet, or stared out at the sky, wondering when the weather would improve. That you chose us for your Wednesday makes me want to share from my not-so-secret chocolate stash with you.

These authors and books informed my writing for The Wig Diaries.

And a few of my favorite kick-ass female authors

Books, reading and bookstores gave me information on freaks and weirdos in my youth. I researched what a glory hole was, while also discovering what it’s like to grow up in other parts of the world. I hope you will continue to support Book Passage since books and community remain more important than ever.

Now I would like to gaze into your eyes (as so many tried to do when I was bald, bloated, stressed and sick) and give you an awkward hug.

Thanks for secretly listening in on our private conversation about various maladies (with permission from Book Passage, of course). Not since those old, shared ‘party lines’ has so much information about illness, pooping – and alleged love affairs – been on display for worldwide gossip. We can thank Mary, Michael, Elaine, and Zoom for that. Plus, my lifelong desire to  get Michael Krasny to discuss Moe, Larry, & Curly – plus that other stooge, Mo Brooks from Alabama – has finally been realized. Good times.

These cartoonists and humor writers have informed my illustrations for The Wig Diaries:

‘Going Too Far’ by Tony Hendra

‘Me Talk Pretty Some Day’ By David Sedaris

‘Hyperbole and a Half’ by Allie Brosh

‘So Long and Thanks for All the Fish’ Douglas Adams

‘Out of Line: The Art of Jules Feiffer’ by Martha Fay

‘Tom the Dancing Bug: A Collection of Cartoons’ by Ruben Bolling 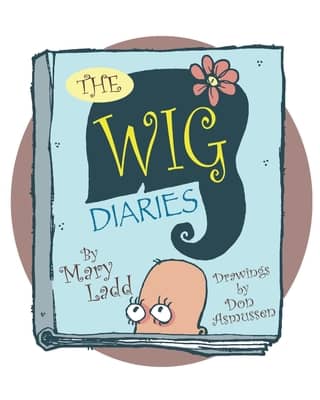