in Conversation with Anne Lamott

Janine Urbaniak Reid’s The Opposite of Certainty is the story of her reluctant journey beyond easy answers and platitudes. Drawn deeply and against her will into herself, and into the eternal questions we all ask, she discovers hidden reserves of strength, humor, and a no-matter-what faith that looks nothing like she thought it would.

Janine writes about her imperfect life, what connects us, and addresses the question of what it means to love fiercely in a sometimes dangerous and always uncertain world.

She was born in Chicago and grew up in California. She graduated from the University of California at San Diego. She was vice president of a San Francisco public relations firm before she began raising a family, and then writing full time.

Janine has been published in the Washington Post, Chicago Tribune, San Francisco Chronicle, and widely syndicated. Hoping to bring humanity into the healthcare discussion by sharing her experience as a mother of son with a brain tumor, she penned a piece for the Post which went viral. She has been interviewed on national news networks, and continues her work as a spokeswoman for healthcare justice.

She lives in Northern California with her family and a motley assortment of pets.

Anne Lamott is the author of seven novels, Hard Laughter, Rosie, Joe Jones, Blue Shoe, All New People, Crooked Little Heart, and Imperfect Birds. She has also written several bestselling books of nonfiction, including, Operating Instructions, an account of life as a single mother during her son’s first year; Some Assembly Required: A Journal of My Son’s First Son; and the classic book on writing; Bird by Bird: Some Instructions on Writing and Life.

“Connection makes it possible to get through days that are too hard and too long.

I’ve found that the surest way to feel acceptance and love is to let it flow through me without stopping to judge whether someone is worthy or not. It’s easy to give to people I’ve chosen as my friends, and the family members who I love the most.

Yet every interaction is an opportunity to put kindness into the world instead of more annoyance and anger. We can practice in small ways.”

All Janine ever wanted was for everyone she loved to be okay so she might relax and maybe be happy. Her life strategy was simple: do everything right. This included trying to be the perfect mother to her three kids so they would never experience the kind of pain she pretended not to feel growing up. What she didn’t expect was the chaos of an out-of-control life that begins when her young son’s hand begins to shake.

The Opposite of Certainty is the story of her reluctant journey beyond easy answers and platitudes. She searches for a source of strength bigger than her circumstances, only to have her circumstances become even thornier with her own crisis. Drawn deeply and against her will into herself, and into the eternal questions we all ask, she discovers hidden reserves of strength, humor, and a no-matter-what faith that looks nothing like she thought it would.

Beautifully written and deeply hopeful, Janine shows us how we can come through impossible times transformed and yet more ourselves than we’ve ever allowed ourselves to be.

Visit the Book Passage website to have Janine’s book delivered right to your door.

You’re sure to enjoy this Book Passage favorite:

The Opposite of Certainty: Fear, Faith, and Life in Between

A personal note from Janine Reid.

Thank you for joining Anne Lamott and me in conversation on Saturday.  If you missed the talk, follow the link below to view it in the Conversations with Authors archive.

We get through tough times together, tapping strength we didn’t know we had, and defying gravity by finding reasons to laugh. Our stories heal and give us hope that we too can get through what seems impossible.

Here are some titles that have helped me when the days are too long.

With love and gratitude, 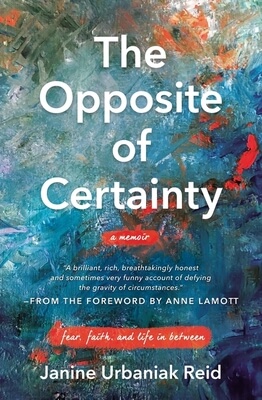 The Opposite of Certainty: Fear, Faith, and Life in Between