in conversation with Mark Nieker

Dominique Crenn’s Rebel Chef is an honest, revealing look at one woman’s evolution from a daring young chef to a respected activist–all as she makes a place for herself in the kitchen, and in the world. Her previous debut cookbook, Atelier Crenn documents Dominique’s rise from her childhood in France to her unprecedented success with her own restaurant, Atelier Crenn, in San Francisco.

Dominique inherited an interest in cuisine from her parents, who celebrated fine dining. After growing up in France and earning degrees in economics and business in Paris, Dominique began her formal kitchen training in San Francisco in 1988. For two years she worked at Jeremiah Tower and Mark Franz’s Stars before moving on to Campton Place, 2223 Market, the Park Hyatt Grill, and Yoyo Bistro.

In 1997, she made culinary history as the first female executive chef in Indonesia, heading the kitchen at the InterContinental Hotel in Jakarta. She returned to California in 1998 as executive chef of Manhattan Country Club in Manhattan Beach, a position Dominique held for eight years. She then opened Abode in Santa Monica, but it was Luce that brought her back to San Francisco and where she earned her first Michelin star in 2009.

A poetic combination of craft, heritage, and storytelling, Atelier Crenn debuted in January 2011, quickly earning its first Michelin star and a second by October 2012. Dominique is the first female chef in the United States to receive a second coveted star and has maintained the distinction through 2018. She was named “Best Female Chef” in 2016 by World’s 50 Best.

Fashioned after the food of her childhood in Brittany, she opened Petit Crenn in 2015, followed by Bar Crenn in 2018.

“I thought that maybe the hard lessons we have to learn in life were over, at least for a moment.  I was ready to dance, to travel, to love, to create.

But it seems that we are being called to do something else right now.  We’re being asked to nurture.”

In Rebel Chef, Dominique Crenn reflects on her untraditional coming-of-age as a chef, beginning with her happy childhood in Versailles where, as the adopted daughter of a politician, she was emboldened to be curious and independent, and to find her own voice. She was exposed to fine dining from a young age, and a family friend, a restaurant critic, encouraged her to see the story behind the food. But at twenty-one, after deciding to become a chef, Dominique found it to be a near impossible dream in France, where men dominated the kitchens. Never one to be told no, she moved to San Francisco to work under the legendary Jeremiah Tower. It was there that her training began.

But there is another reason Dominique has always felt free to pursue her own unconventional course. Adopted as a toddler, she didn’t resemble her parents, or even look traditionally French. Growing up she often felt like an outsider, and was haunted by a past she knew nothing about. But after years of working to fill this blank space, she recognized this duality as a source of strength, one which gives her the power to be whoever she wants to be.

Filled with stories from the years Dominique spent working in the male-centric world of professional kitchens, tracking her career from struggling cook to being named the World’s Best Female Chef, starring on Netflix’s Chef’s Table, and running one of the world’s most acclaimed restaurants – while at the same time speaking out on restaurant culture, sexism, immigration, and climate change – Rebel Chef is an honest and revealing look at one woman’s evolution from a daring young chef to a respected activist. At once a tale of personal discovery and a tribute to unrelenting determination, Rebel Chef is the story of one woman making a place for herself in the kitchen, and in the world.

Her previous debut cookbook, Atelier Crenn is the gorgeous book that traces Dominique’s rise from her childhood in France to her unprecedented success with her own restaurant, Atelier Crenn, in San Francisco. Dominique’s food is centered around organic, sustainable ingredients with an unusual, inventive, and always stunning presentation. Her recipes reflect her poetic nature with evocative names like “A Walk in the Forest,” “Birth,” and “The Sea.” Even the dishes that sound familiar, like Fish and Chips, or Broccoli and Beef Tartare, challenge the expected with their surprising components and her signature creative plating. This impressive and beautiful cookbook by a chef who is often the only woman to be mentioned in the same breath with other culinary giants is bound to captivate the food world.

Visit the Book Passage website to have any of Dominique’s books delivered right to your door.

Rebel Chef:In Search of What Matters

A personal note from Dominique Crenn.

Thank you to everyone who tuned in and was part of the conversation about my latest book. I’m so excited to be telling my story and to be able to share it with a community of avid readers.

As a reader myself, I am currently diving into work by Toni Morrison. I have always admired her as a personality but have only recently dived into her work.  I’ve been reading The Source of Self Regard and am loving it.

I’m wishing you all a lovely summer full of inspiration and adventure, if only on the page! 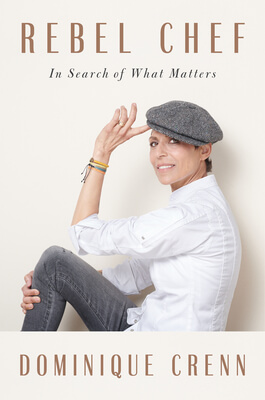 Rebel Chef:In Search of What Matters 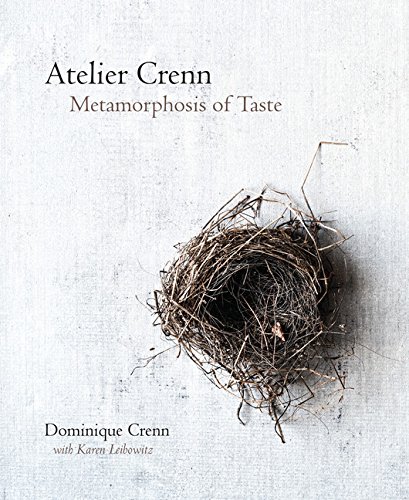